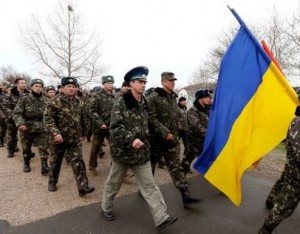 More than 400 Ukrainian soldiers crossed the Russian border and defected, said a border guard, according to a report by the Russian Interfax news agency issued on Monday.

Ukrainian soldiers “called for a humanitarian corridor during the early hours of Monday” on the border between Russia and Ukraine, said a regional manager of the Russian Security Service (FSB) quoted by Russian news agency Tass and Interfax.

An Ukrainian spokesman questioned by AFP said that an unspecified number of Ukrainian soldiers “were forced to fall back towards a Russian border post after an attempted attack”.

The rebels fired for four hours with heavy weapons, including tanks, mortars, artillery and Grad rocket launchers, he said, till the brigade was forced to split into two sections to break the site.