Ukrainian troops are withdrawn from Crimea 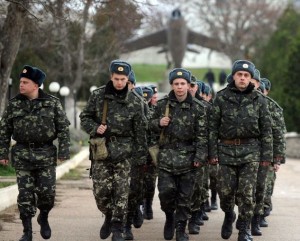 The acting president of Ukraine, Oleksander Turchinov, said this Monday during a session of Parliament, that his country will withdraw all its troops from Crimea as a result of Russian military pressure.

Turchinov explained that the decision to withdraw troops has been taken as a result of “threats to life and health of our staff and their families.”

“The National Defence and Security Council has instructed the Defense Ministry to organize a redeployment of military units in Crimea and perform the evacuation of their families,” he added.

The withdraw decision occurs after Moscow’s troops took control of an important base of the Ukrainian Navy close to Theodosia, 110 kilometers at the east of Simferopol, the capital of Crimea.