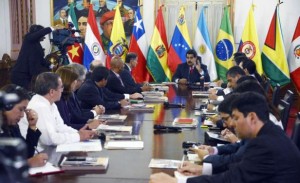 The Special Commission of Foreign Ministers of the Union of South American Nations (UNASUR) will meet on February 9 in Montevideo, Uruguay, to analyze the internal situation of Venezuela and its relationship with the United States, at the request of Venezuelan President Nicolás Maduro.

By decision of the Council of Foreign Ministers of the regional body, the special commission is composed of representatives from Ecuador, Colombia, Brazil and Venezuela.

Uruguay, which holds the pro tempore presidency of the body, will be hosting the mediation meeting of UNASUR in a process that allows to strengthen democratic institutions in Venezuela and help to find mechanisms for dialogue with the United States, reads part of a statement of the Foreign Ministry

Ecuadorian Foreign Minister Ricardo Patiño said that Ecuador, which holds the pro tempore presidency of the Community of Latin American and Caribbean States (CELAC) as part of the group of foreign ministers that was developing dialogues between the Venezuelan government and the opposition, will continue the decision of strengthening institutions in Venezuela, to avoid destabilization in the South American country.