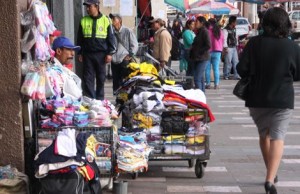 A report published by the National Institute of Statistics and Census (INEC) shows a reduction of the informal sector in the economy thanks to the new calculation methodology applied from this July 16 for the measurement of employment in the informal sector.

The new methodology incorporates to the forma sector those who have a Taxpayer Registration (RUC). Thus, the informal sector in June 2015 was 39.3% with the new methodology, while the previous would have reached 53.4%.

According to the INEC, the previous methodology “would turn into informal those who have a RUC, carry basic accounting, even though they were not required by law to carry a full accounting, said Jose Rosero, director of the entity. He added that _ taxpayers of the Simplified Tax Regime (RISE) were considered informal, despite having a RUC and carrying a basic accounting.

Details of national strike are prepared