Details of national strike are prepared 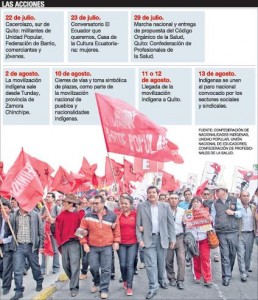 Indigenous, workers, retirees, students, teachers, doctors and social organizations polish the details of what will be the national strike announced for Thursday August 13.

There will be no closing of public service institutions or damage to private property, only road closures as announced by indigenous peoples and nationalities.

Aware of the penalties established in the Comprehensive Penal Code (COIP), Pachakutik Assemblyman Pepe Acacho said that all actions they will drive are covered by the right to resistance guaranteed in Section 98 of the Constitution.

That norm indicates that resistance against actions or omissions of public authorities or non-state natural or legal persons who violate or may violate their constitutional rights can be exercised and the recognition of new rights can be demanded.

But Acacho is clear: the aim of the protest is not to destabilize the country because “we have not come to knock someone who is already fallen.”

Meetings, sit-ins, pot-banging marches, talks, meetings, adhesions and the walk from south of the country, on August 3, will proceed to the strike.

President Rafael Correa considers illegal this strike, in addition to some social sectors that do not support a mobilization against the government.

Chevron submits final appeal before the Constitutional Court of Ecuador