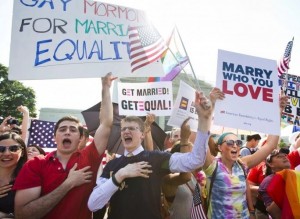 The United States Supreme Court on Monday declined to rule on the legalization of gay marriage nationwide and rejected appeals of five states seeking to prohibit marriage between persons of the same sex.

The Court’s decision held immediately will allow gay marriage in the states of Virginia, Oklahoma, Utah, Wisconsin and Indiana.

Gay marriage in America is legal in 19 states and in the District of Columbia, but with this decision of the Supreme in practice will increase to 30 the total number of states in which weddings may be held between people of the same sex.

Analysts believed that the Supreme would accept for processing at least one or two cases on gay marriage in this new session to issue as well a ruling with national implications before June 2015.