UNP does not agree with new restrictions on media 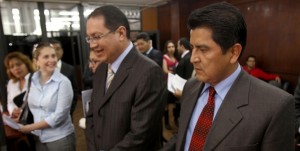 The National Union of Journalists (UNP for its Spanish acronym) rejected the ruling of the Constitutional Court that limits the work of the media in the coverage and publication of cases of indigenous justice.

The court resolved that “it is the duty of all public, private and community media that for the dissemination of indigenous justice cases, is previously required the authorization of the concerned indigenous authorities and to report the facts ensuring the accuracy and contextualization, comprehensively reporting processes of internal conflict resolution and not only acts of punishment”.

The National Union of Journalists (UNP) said in a statement that the decision is “unmotivated and therefore void”.

They added that the provision “is part of the malicious communication strategy of the current government, which aims to control what the media disseminates, restrict the work of journalists and deliver official truths to the citizens”.