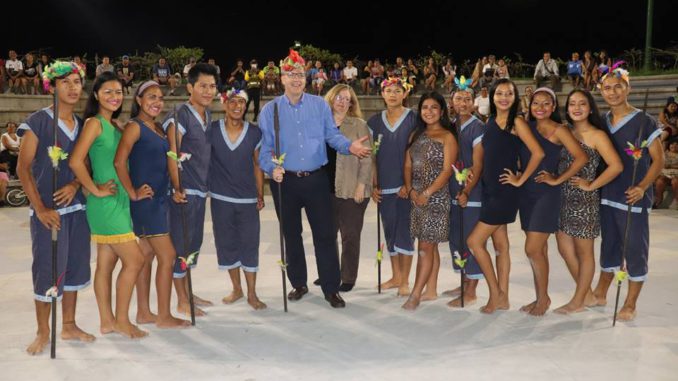 The US ambassador in Ecuador, Todd Chapman, went to the Amazon of the Andean country to visit three provinces, the diplomatic legation of the North American country informed today.

The diplomat’s agenda includes tours of Archidona and Tena in the province of Napo; Puyo and Shell in Pastaza and Macas in the province of Morona Santiago, to highlight the activities of the US Mission in support of the Amazon region, the Embassy said in a statement.

During his trip, which will end next Thursday, he is scheduled to meet with mayors, prefects, governors, communities and members of civil society to learn more about his work and the attractions of each province. In each locality he will try to meet with professors and students to encourage them to participate in the programs sponsored by the Embassy and to share with them the benefits of education abroad, the document indicates.

He details that Archidona toured the factory of a US company that produces beverages made with guayusa while promoting the conservation of rainforest biodiversity and supports independent farmers to be self-sustaining.

In the province of Pastaza, his program includes tours of several places of tourist interest along with the authorities of the province where he expects to talk, in addition, with representatives of the Confederation of Indigenous Nationalities of the Amazon (Cofeniae).

In Morona Santiago, you will visit tourist and cultural attractions of the city of Macas, as well as the Plaza Twintza and the Asunción parish

During his visit to Tena, the ambassador announced a new grant of $ 10,000 for studies abroad granted to the Amazon Regional University, IKIAM, which will support a program of studies on biodiversity in the Amazon region.

According to the Embassy, the diplomat’s journey underscores the commitment of the US government for supporting programs that contribute to preserve the biodiversity of Ecuador and in particular of the Amazonian area.

Also emphasizes support for higher education and, in general terms, underlines “the firm and broad bilateral relationship that unites the United States and Ecuador,” the statement ends. (I)

Prosecutor asks for more proceedings on the Petrochina case