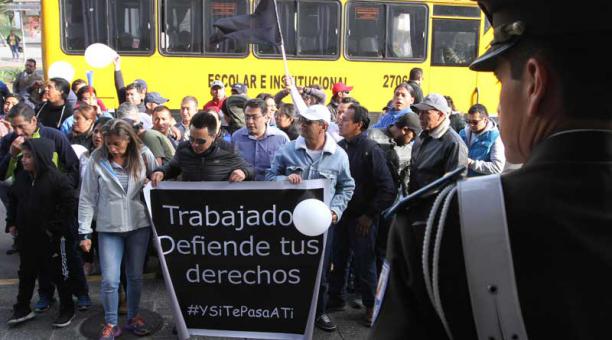 In an extraordinary session held on the morning of Wednesday, March 21, 2018, the Constitutional Court ruled on three key issues of the Law of Labor Justice and Recognition of Unpaid Household Labor, in force since 2015.

The judicial body declared unconstitutionality in three issues that raised concerns for workers and retirees: the elimination of 40% of the State’s contribution to the pension fund of the Ecuadorian Institute of Social Security (IESS), the limit on the earnings of workers and the vulnerability to freedom of association.

40% of the State’s obligatory contribution to the IESS for the payment of pensions was substituted -according to Article 68 of the Labor Justice Law- for a subsidy, which will be applied only when the IESS does not have “the economic resources to cover the obligations in course of payment of the Obligatory General Insurance and of the special regime of the Rural Social Security “.

The lack of state contribution deepened the deficit of the Disability, Old Age and Death Insurance, which generated a decapitalization of this fund. This year a new divestment of USD 1 669.6 million is foreseen, to cover the expenses of benefits, since the contributions of the affiliates are not enough.

In a final report, the International Labor Organization confirmed on March 15 that the elimination of 40% of state contribution was a measure that had a negative impact on the sustainability of Social Security.

The ruling of the Court was applauded by José Villavicencio, president of the Workers Unity Front (FUT). “Today the independence of the state institutions and the rights violated in the correísmo is recovering “.

Henry Llanes , member of the National Front of Retirees of the IESS, recognized the Court’s ruling as a fair measure, although he said that it was a “very serious” error to have allowed three years to pass since the lawsuits were filed. “Judges must act in law, regardless of who is in the government.”

It is not yet clear if the ruling in this case has retroactive effect, which would imply paying 40% from 2016.

Likewise, the Court declared unconstitutional the article 15 of the Labor Justice Law, on the cap of 24 basic salaries to the profits that the workers receive. The surplus financed the insurance for housewives. This year, the measure would affect employees and also their family responsibilities, as approved in May 2017 by the Ministry of Labor.

Raúl Ledesma, head of that Portfolio, yesterday greeted the ruling of the Court and stressed that it is the result of the struggle of the unions and workers’ unions.

He indicated that it is expected that from next month the workers will receive full profits, corresponding to the 2017 fiscal period.

Ledesma added that the measure is not retroactive. “Those values that have been delivered to the IESS have served to sustain the social security fund.”

Juan Carlos Oleas, representative of the group Y si te pasa to you, made up of workers affected by the ceiling on profits, was satisfied with the restitution of a right of the employees they consider was restricted.

He said that they will have an approach with the Minister of Labor. He recalled that this official was in favor of considering the retroactivity of the profits delivered last year.

The FUT highlighted the Court’s ruling on Article 49 of the Law, which, in the guild’s judgment, threatened the union. The rule states that all workers can be members of the board of directors of the company committee, even if they are not unionized.

A mechanism must be found to restore the values that were confiscated to 16,000 families, who were affected by the limit on the payment of profits.

The Government will find it more convenient to comply with the contributions of 40% to the IESS, which will cover the deficit that the entity has. The same does not have the resources to make those contributions, which border USD 1,200 million.

Removing the ceiling to the utilities is a step backwards. Solidarity is a quality of human nature, equitable societies are needed. By withdrawing it, the source of financing for housewives is affected.

Manuel Muñoz, Confederation of Retirees and Pensioners of Montepío.

This is doing justice to Ecuadorian retirees. We have been asking for a 40% refund for several years, because the IESS belongs to the affiliates. At good Time.  (I)