Vanguardia Magazine Could Not Support Their Information 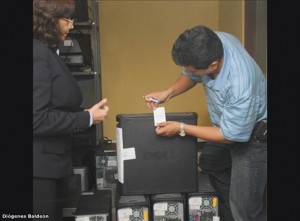 The payment date of the Trusteeship AGD-CFN “No más impunidad” is at one day of expiration, but the magazine is not willing to pay the $ 14, 560 because it is expecting the resolution of the case in the courts of Tenancy.

Luis Zumárraga, manager of Vanguardia magazine, said that he did not pay the rent because he wanted to determine the real actor which was supposed to receive the pay. According to the officer the media had to deal with several legal representatives of the property requiring the payment of rent, including relatives of the former banker Peñafiel.

The magazine expects the resolution of the case in the courts of Tenancy.

On the other hand, yesterday the copies of hard drives were supposed to be made at 16:00, the managers of editorial Gran Tauro, owner of Vanguardia magazine, were upset because at 16:30 the fiscal Clara Aveiga and the judicial depository Paúl Cabezas arrived at the premises to do another judicial process but not the copy of the hard drives.

Andrés Crespo, president and legal representative of the editorial, today will submit in Guayaquil a complaint for contempt against Paúl Cabezas Arellano, who already had received the judge’s Angel Rubio order allowing the backup of the information.

Now magazine executives are expecting the decision of the judge Rubio and they hope that the support can be made immediately.