Vázquez and Lacalle will go to runoff elections in Uruguay 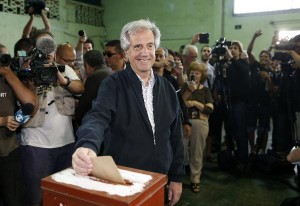 Tabaré Vázquez, from the ruling party, and his opponent, Luis Lacalle Pou, will go to a runoff in November 30 to define the next President of Uruguay. The leftist candidate imposed himself in the election yesterday but not exceeding the half of the votes.

The Frente Amplio (FA), a party that has ruled the country since 2005, scored between 45% and 46% of the votes, against 31% and 32% of the conservative National Party (PN), according to preliminary data from the Consultant Factum.

It is expected that the second round is fought since Lacalle Pou might have the support of fellow conservative Colorado Party, whose candidate, Pedro Bordaberry, was third with between 13% and 14% of the votes, according to Factum.

In addition, in the upcoming election, 30 senators and 99 deputies of the Parliament shall be elected. According to polls, the leftist ruling party had lost its parliamentary majority.