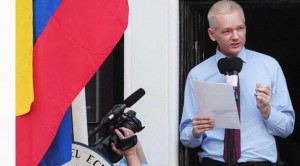 The Wikileaks founder Julian Assange denied on Saturday October 25 that he will soon leave the Embassy of Ecuador in London, where he remains confined since July 2012, although he is hopeful that his legal status in the United Kingdom and Sweden can be clarified.

“I have not said I will vacate the embassy soon. That is what the press has invented. I only repeated a joke that others had done,” Assange said in an interview with Spanish radio station Cadena SER.

More concerned he was about the possible claim and request extradition the United States can do and that, in his view, can be aggravated if Hillary Clinton, who was Secretary of State when Wikileaks leaked diplomatic cables, becomes candidate for president in her country.