BREAKING NEWS
In the United States, they accuse an oil subsidiary trader for alleged money laundering scheme
The Government of Ecuador denounces millionaire fraud in pensions of the Police
Nemonte Nenquimo, Waorani leader, is among the 100 most influential figures of 2020 for his environmental fight
Withdrawal of fleet of Chinese ships from the outskirts of Galapagos brings relief, but does not remove the danger for the species
Chancellor confirmed the process of expanding the continental shelf
Weakening of the dollar improves the country’s competitiveness in Europe and Asia
Core Petroleum paid Enrique Cadena $ 10.2 million, reported as suspects
Activity of the Sangay volcano is discrete and its incidence is minimal in the ash production
Families remembered their deceased relatives in the COVID-19 pandemic at mass in the Metropolitan Pantheon
Central Bank foresees slight growth of the economy in 2021 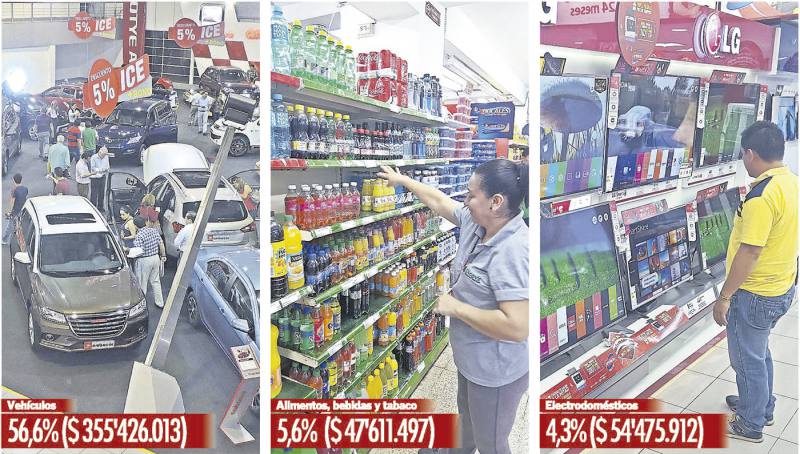 Wholesale and retail trade was the economic activity that registered the highest increase in sales (10%) in the first two months of the year compared to the same period in 2017, above twelve other activities.

The rebound is confirmed by representatives of some sectors, although they agreed that there are factors that are not taken into account and that makes the indices are not as positive as they appear.

In the case of vehicles there are more updated figures. Manuel Murtinho, manager of the Ecuadorian Automotive Association (AEA), said that from January to March 32,108 vehicles have been sold, 6,678 more than in the same period of 2017 when they left 19,393, based on figures from the Association of Automotive Companies of Ecuador ( Aeade).

The increase in sales, according to the manager of AEA, began to be reflected in 2017 when the government eliminated import quotas and safeguards. That year the automotive sector sold 104,980 units, while in 2016 only 63,555, but clarified that they still do not match their best year in 2011 with 139,808 vehicles sold; and that in a general balance sheet, as a result of these measures, the sector stopped selling 76,253 units to date, as this year it is projected to sell about 127,000.

As for Christian Wahli, president of the National Association of Food and Beverage Manufacturers (Anfab), these first months have not been bad for the sector and he pointed out the interesting appearance of new brands that bet on innovation, especially cheeses, dairy products, yoghurts, sauces, chili peppers and other products from microenterprises.

As for 2017, Wahli pointed out that there was an increase of around 5%, although he was very cautious with the variants and comparisons, since he said that certain factors such as promotions should be taken into account. “Many in 2017 sold for promotions, so although it is true in the variation and sales is seen, I would say, between 7% and 9% increase, the actual sale did go down,” said the manager, who pointed out that in some categories of food, profits fell between 15% and 17%, while others did meet their projections,

He also described the recovery of that year as “almost artificial”, due to the economic injection made by the Government to pay its suppliers what was reflected, according to Wahli, in the purchase of food, added to the last months of the year in the that the industry makes a large part of its budget.

For his part, Andrés Mata, president of the Association of Warehouses of Appliances (Asadelec), said that at this point of the year the union still cannot make a balance of the sales of the different chains, but until the end when they should send information to the SRI. “All the statements that are made, are made last year for tax issues, they do so until April,” explained Mata.

However, he referred to the comparative balance between 2017 and 2016, period in which sales were maintained, and said there were low quarters.

Manuel Murtinho, manager of AEA, estimated that his sector will reach its highest peak in July and August, after the Autoshow 2018 in June.

The European cars also had an upturn. For example, Volkswagen went from selling 236 vehicles in January and February of 2017 to 738 in the same period of this year. (I)

The drought damaged 49,000 hectares of corn in Manabí