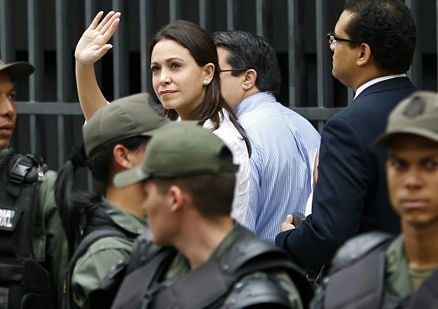 The former opposition lawmaker Maria Corina Machado was formally charged this Wednesday by the Venezuelan Public Prosecutor of “conspiracy” in a plot to assassinate President Nicolas Maduro.

The prosecution charged Machado “the crime of conspiracy” by “allegedly having links with the assassin plan against the president,” the prosecutors said in a statement after the opposition member was present to testify.

According to the Venezuelan penal code, if found responsible, Machado would be “punished with imprisonment from eight to 16 years,” added the statement of the prosecution, which does not specify when the trial will start.

“Today they charged me for the crime of conspiracy. All allegations and alleged evidence are absolutely false and I have rejected them,” said Machado when leaving the Prosecutor´s office, who also labeled as “infamy” the evidence and the charges against her.