José Bernal could not fulfill the dream of getting his parents and brothers from Venezuela to give them a better life, as he offered them. After three years of having lived between Ecuador and Peru, this 27-year-old migrant decided to return to his country. 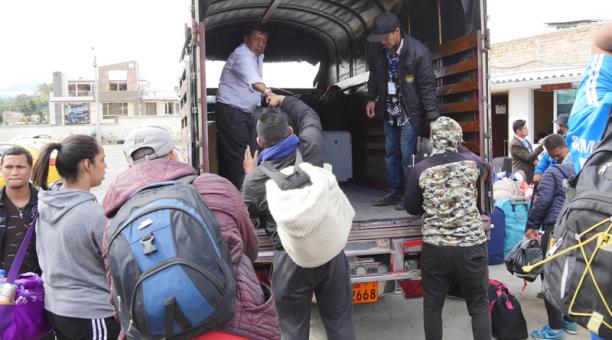 Together with his wife, his son and a group of approximately 200 compatriots, he was waiting on Tuesday, December 3, 2019 at the Tulcán land terminal, in Carchi, to continue his trip to Cúcuta, on the border between Colombia and Venezuela.

Since last September, the number of Venezuelans leaving Ecuador by the Rumichaca Bridge, border between Ecuador and Colombia, has increased in relation to those who arrive.

This is the main step in the country where migrants have been mobilizing for three years, when the mass exodus to neighboring countries began, due to political and economic problems in Venezuela.

But the lowest income and the largest departure of Venezuelans from the northern border began after August 26. This is stated in a report by the Mobility Bureau of Carchi. Since that date, the Ecuadorian Government requests the presentation of a visa to Venezuelan citizens.

Bernal does not plan to leave his homeland again. He explains that he has no passport to return. Therefore, he hopes to set up a business with the money he managed to save. Despite having a university degree in Business Administration, outside his nation he worked as a construction worker and road laborer.

He earned less than the unified basic salary (USD 394) in Ecuador. Several times he had to work for half that amount. Almost every month he sent USD 35 to help his relatives in his homeland.

Among the travelers waiting at the Tulcán terminal were citizens residing in Chile, Peru and Ecuador. One of them is Mildrek Vásquez, a native of Anzoátegui, who settled in Peru.

On this trip her two children accompany her. He returns with the hope of meeting with his parents and siblings, to share the December holidays. She worked as an employee in a restaurant in the city of Huancayo.

Her husband works as a welder. He stayed in the apartment they rent in Peru. Vasquez and his children have a passport and visa to enter the southern country again. They plan to do so in January of next year.

However, most people who are returning to Venezuela will not try to leave again. That is the criteria of Daniel Regalado, director of the Venezuelan Civil Association in Ecuador.

He says that many return home disappointed that they did not get a job. Others flee from xenophobia and discrimination.

In the terminal, migrants are received by employees of international transport companies. Details are explained, such as the need to declare the exit at the Migration office in Ecuador and the entry into the dependency of Colombia. The ticket from Tumbes, Peru, to Cúcuta costs USD 120, explains Julio Arias, SkyBus travel advisor.

He notes that since the previous month, the rate costs an additional USD 10, because there is more demand for people who are back. Remember that until the previous year the migration phenomenon was reversed.

Interprovincial passenger transport companies in Ecuador have had to increase the number of frequencies from Huaquillas, on the border with Peru, to Tulcán, says Andrés Lafuente, administrator of the Carchense terminal. He says that the five daily frequencies (trips) made by three transport companies tripled from the previous month.

Some travelers arrive by bus to Tulcán. Then they are transported in trucks, with their suitcases, to Rumichaca and continue their journey again in buses.

Others return to Venezuela on foot; They are observed as it advances along the edge of the North Pan American Highway. Some are travelers who migrated informally and could not raise the USD 280 required to regularize their stay, says Regalado.

USA and Ecuador resume dialogue with the four-issue debate