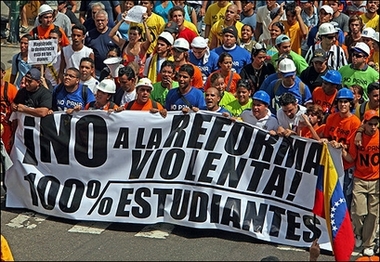 Opponents of President Hugo Chávez marched through the streets of Caracas as a mean of protest against the violence that takes the lives of so many each year. This situation has become worse in the last decade.

Demonstrators played drums and carried signs with images of skulls and crossed bones while they sang words like: “Enough of this!”, “No more deaths”. In the meantime journalists estimated that the mob was of 1,500 civilians. A hearse car rode with the march with several signs on it; one read: “Who will be the next occupant?”.

Nurse Gladys Pérez, one of the demonstrators said she was surprised by the sheer amount of persons that arrive every weekend with bullet wounds to the emergency room in the hospital. “We have come to have over 60 wounded in one weekend” says Pérez of 55 years. Also adds that in the three decades as a nurse she never has seen so much blood. “There is a undeclared war here, I don´t know how to call it”.

Venezuela has one the highest rates of murder in Latin America. The Venezuelan Observatory of Violence; an organization dedicated to the study of crime has estimated that more than 16,000 homicides occurred last year. This numbers would give the country a toll of 56 murders for every 100.000 habitants which are much higher than México. Despite the assassinations related to the drug trafficking whose percentage is of 14 homicides per 100.000 persons in the last year.

Many demonstrators openly accused Chávez because of not taking any measures. Naturally the President ignored the critics saying: “So they want to blame me for the violence!, violence is one of the effects of social injustice, capitalism and the model imposed by the 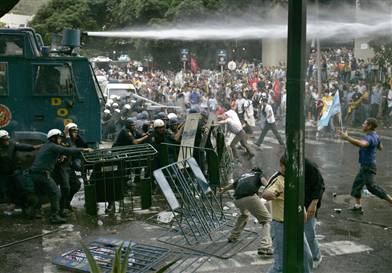 Chávez said that his revolution is target of a world media campaign based on intrigue. The campaign is shown on CNN as the “The guardians of Chávez”. The documentary talks about the violence that assail the country pointing out the relations between venezuelans and the colombian guerrilla.

“And on top off it all last Monday we got another missile from The New York Times saying that Venezuela is even more dangerous than Iraq” Chávez remarked.

The president explained: “Who would dare to compare the scale of violence unleashed in Iraq,  product of a genocidal invasion with the structural insecurity in Venezuela that my government inherited and faces it with the greatest firmness and rigor from a preventive and repressive vision”.