Verdict of the Court will define second change in the Constitution 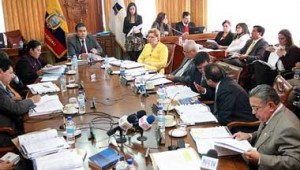 The Constitutional Court (CC) must define whether the changes of the Ecuadorian Constitution approved in 2008 proceed, for the second time.

In 2011, the Court endorsed the Execuive’s referendum request to change points of the Constitution. This year there is  a request for an amendment that would make viable indefinite reelection for the elections of the  2017.

Rafael Correa, President of Ecuador, said on Tuesday that his decision to go on reelection dependa on the verdict of the Court and the political situation in the coming years.

The organism  that will decide the request is not the same as the one that processed the referendum in 2011, although three of its nine judges were part of the previous administration.

They are the Judges: Patricio Pazmino, Ruth Seni and  Manuel Viteri Olvera.