A drone followed the trajectory of the huge Esplanade APL since it entered the estuary that leads to the port terminals of the Trinitaria Island, in southern Guayaquil. 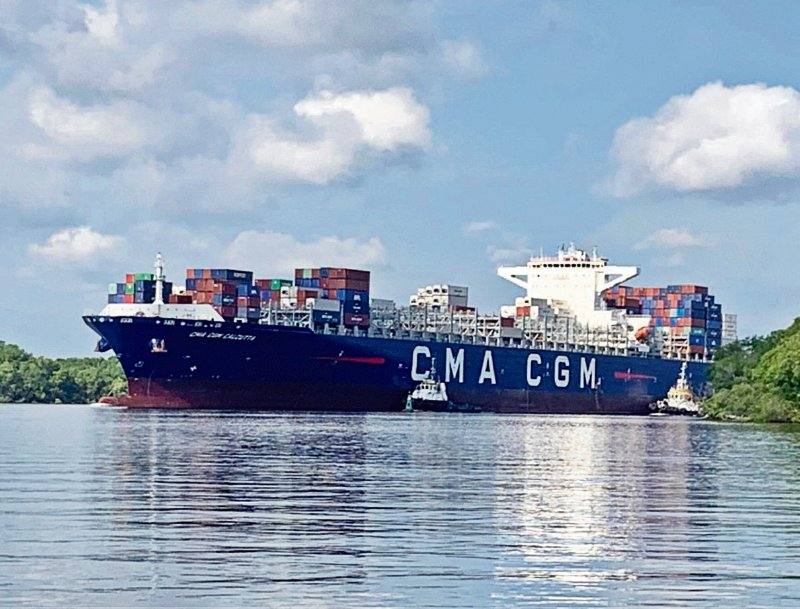 It was the morning of January 16 and the ship of 368.62 meters in length (bow length to the stern) and 52 meters of beam (width) could be seen from several corners of the Santa Anta estuary. On its deck it carried up to a row of eight containers, one on top of the other.

It accommodated without problems at the Guayaquil Port Terminal (TPG), a private facility that receives more ships in that sector. The trajectory he covered and the maneuvers that the APL Esplanade made upon entering the city were recorded in a video that TPG shared among its clients.

It is the largest ship that has entered Guayaquil, with the benefit that now has a deeper access channel with the dredging made by the firm Jan De Nul.

Since last May, once the obstacle called the Goals was removed, the city began to receive ships of enormous size, whose length and beam could be equivalent to the size of 3.5 to 4 professional soccer fields.

The Maritime Chamber of Ecuador records that from May to November, when the boats could already prove the benefits of dredging, four vessels between 335 and 346 meters in length entered the city: Cochin, Calcutta, Mundra and Svendborg.

Two of them docked at Contecon docks, the concessioned state port, and the other two went to TPG docks. The APL Esplanade, which entered last January, joins this group of container ships that have entered this new port era.

Sergio Murillo, Bananapuerto executive and president of the Association of Private Port Terminals of Ecuador, points out that the terminals have had to adapt their infrastructures with reinforcement or growth of docks, dredging their berthing fronts and investments in port machinery (longer-range cranes ) to attend the ships that transit taking advantage of the greater draft of the canal.

The manager explains that the port infrastructures are ready to receive the economic growth of the next 20 to 25 years, but the arrival of ships of enormous dimensions will depend on the performance of the country.

“The shipping lines are very agile and dynamic in reading cargo flows, and based on that make decisions to send larger ships. The important thing to capitalize on this, and that is already done, is that the channel is ready and the appropriate port terminals with its infrastructure, ”he says.

But after dredging, there are challenges to be fulfilled to make the most of this moment. Javier Moreira, manager in Ecuador of CMA CGM, the shipping company that has entered more giant ships after dredging, believes that the ports must provide logistic solutions that were previously given in extraport areas: warehouses, consolidation, distribution.

He also believes that work must be done so that customs authorize the movement of cargo between cargo terminals in international transit (called cabotage) and thereby increase the movements within each terminal and benefit the financial year. (I)

Fernando Donoso, president of the Maritime Chamber of Ecuador, has indicated that after dredging work it is necessary to improve road connectivity to ports. The fifth bridge, which will connect the port area with Durán, is one of the projects that the shipping sector considers important. The Ministry of Transportation said last week that it received a private proposal for that work.

The blockchain has different uses