Via Crucis Against Anti-Immigrant Laws was Held in Miami 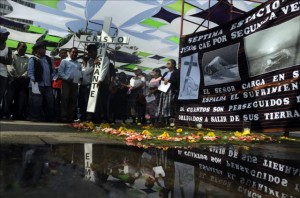 Hundreds of activists staged today a Via Crucis to symbolize the struggle of immigrants and to protest against laws which could criminalize them in Miami, Florida.

Using banners, showing slogans like “We do not want an Arizona law here in Florida” and images of the Passion of Jesus, demonstrators held a protest outside the office of Rep. Carlos Lopez-Cantera, Majority Leader of the House Representatives of the state Legislature.

Kathy Bird, coordinator of the campaign “We are Florida” of the Florida Immigrant Coalition (FLIC), said: “We’ve made a parallel between the struggle that Jesus had and that the one that immigrants have. Just as Jesus endured much suffering and faced difficulties, thus suffer and face challenges immigrants in each step they do to come to the U.S.,” and compared them by saying that” Jesus was an immigrant who was also rejected and discriminated as we are today with laws.”

According to Bird, the bills that were introduced in the Legislature “will worsen the situation. It is a federal problem, not a state. States do not have to approve these racist laws that at create many problems among immigrants and the police.”

Japanese Exports Value Falls due to the Environmental Catastrophe