Victor Villacres will assume representation of the Executive in the IESS 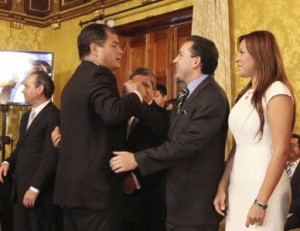 The Superintendency of Banking and Insurance (SBS) will possess economist Victor Hugo Villacrés today as a representative of the Executive at the Board of the Ecuadorian Institute of Social Security (IESS).

Villacrés will replace Fernando Cordero, despite he is 36 years old, which represented an obstacle to his appointment due to Article 29 of the Social Security Act that states that the minimum age for holding office in the Directing Council of IESS is 40.

Given this, the Government requested that a resolution of the Constitutional Court suspend this requirement temporarily, which took seven days to the organism to resolve.

Three days after Fernando Cordero resigned to IESS last March 21, President Correa filed to the Constitutional Court a claim of unconstitutionality to this age requirement demanded by Social Security Act, “in order to prevent and stop the threat or violation from rights conferred upon the Constitution …”