The Table of the Spanish Congress, whose majority is composed of deputies of the governing coalition (PSOE and Podemos), inadmisted this February 11 a bank of questions presented by the president of Vox, Santiago Abascal, on the supposed financing of Podemos by the Prometheus Program , of former President Rafael Correa, considering that it is a matter outside the parliamentary control of the Government, according to Spanish media. The issues refer to a controversy of 2015, in full hatching of the leftist party. 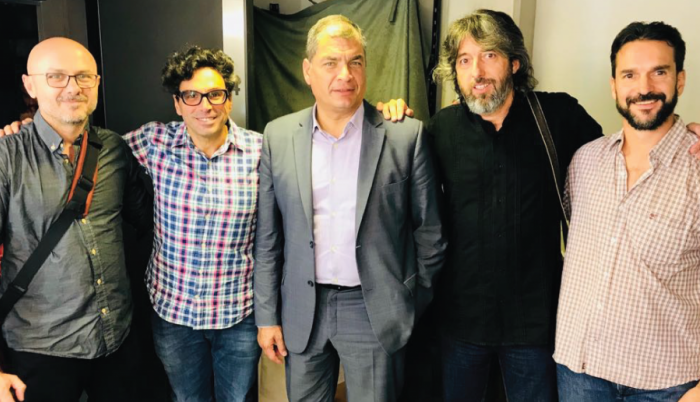 After the session, the deputy of the far-right party, Iván Espinosa de los Monteros, told the media that “in a singular act” We could “convince the PSOE” not to allow Vox to question the president of the Government , Pedro Sánchez, about the “initiatives that Podemos has taken in recent times”.

The questions refer to the “alleged irregular financing of Podemos and the payments made to its leaders from the Latin American Strategic Center for Geopolitics (Celag) and the Prometheus Program of the Ecuadorian ex-president Rafael Correa”.

In addition, Espinosa de los Monteros said that Vox wanted to ask Sanchez if he is going to take measures “in relation to these payments of millions of euros.” It also questions him when the Government will urge the Attorney General to act with regard to Podemos’s finances. According to Vox, this “inaction” of the State to verify the alleged financing of Podemos could “be a consequence of the government coalition that maintains that party with the PSOE” .

These questions of Vox in Spain relive the controversy that arose five years ago in Ecuador when several national media reported on the link between members of the Dome and militants of the correísta party through the Latin American Strategic Center for Geopolitics (Celag), whose headquarters is Quito, and where Rafael Correa and Pablo Iglesias, current vice president of the Spanish Government and leader of Podemos, have been professors.

According to an investigation by the Spanish media ABC conducted in 2015, the Spanish leftist party would have received funding from several Latin American states, including Ecuador , through consultancies conducted by Podemos leaders under the figure of Celag.

The Center’s website details that Rafael Correa and René Ramirez , former head of the Ministry of Higher Education, Science, Technology and Innovation (Senescyt), are part of the Celag Advisory Council . That connection is what would have allowed Spanish party academics to benefit from the Prometheus scholarships. EXPRESS was contacted, unsuccessfully, with the former educational head of Ecuador on the resurrection of the controversy.

The Prometheus program, promoted by the Government of Correa, brought hundreds of professors, researchers and scientists, as of 2010, to work in Ecuadorian universities.

The United States is the first partner of Ecuador