Weekly Address on April will be held in New York 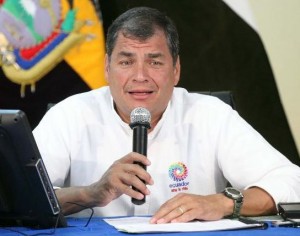 President Rafael Correa will perform on April 12, the Weekly Address from abroad. This time the labor report will be issued from New York, United States. The Government sees this event as a way to bring the government closer to migrants.

This is not the first time the President makes his report from abroad. The Communication Secretariat previously performed transmissions from the United States and Spain.

“For me it is one of the most intense things, something indescribable, tremendously deep, incredibly intense,” said last Tuesday the President about the expected meeting in April, with Ecuadorians living in New York.

At Queens College, NY, a Weekly Address was already performed in September 2011, and according to official reports, there were 1,500 spectators.

So far, the President and Vice President have directed 365 Weekly Addresses.