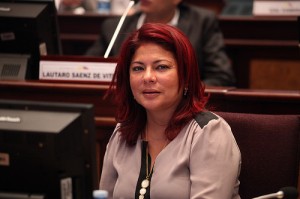 Italia Jijón, alternating Assemblywoman of Alianza PAÍS (AP), and wife of the deceased Mayor of Muisne, Walquer Vera, yesterday reiterated what her husband said last Thursday in a radio interview: that he received death threats after he won the election .

Furthermore, Jijón said that Vera had reported a possible corruption in the Municipality of Muisne. Which would be related to drug trafficking.

Vera, who obtained las Friday his credentials from the National Electoral Council (CNE), was surprised by suspects in a van, who shot him five times, according to the Prosecutor´s office.

“I call for justice, that the President (Rafael Correa) knows, please, the corruption network that handle certain officials who are close to the government and that is here where this situation begins,” said Jijón in an interview with Ecuavisa TV.

Regarding the death of Vera, Correa tweeted the following statement: “Yesterday (Sunday) was murdered the Muisne elected mayor of AP35. Do not let violence prevail. We, the good guys, are more ”

Four people were arrested on Sunday afternoon as part of the investigation the prosecution develops for the murder of Vera. However, the institution does not advance which would be the alleged criminal causes.