On June 9, an Ecuadorian company exported for the first time a container of organic cocoa to Austria. ProEcuador indicated that the operation was carried out with the support of Ecuador’s commercial office in Turkey, and kept the names of the companies involved in the negotiation confidential. However, the fact that Ecuador exports organic products is not an isolated or recent event. 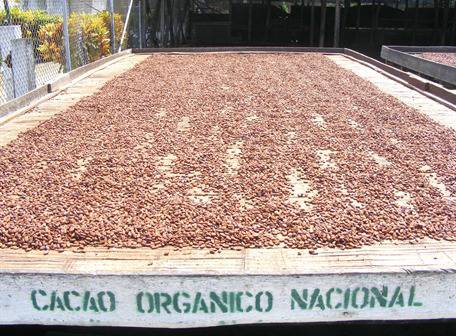 Exports of these items have increased by 10.1% between 2018 and 2019. It also ranks first among the exporting countries of vegetable preparations, tropical fruits and nuts, with an increase of 20.6% in its sales to the European Union in 2018 and 2019.

Ecuador has 103 companies exporting organic products destined for the European Union. The destination country with the highest quantity of organic products exported from Ecuador is the Netherlands (21.74%),followed by Italy (20.92%), Ireland (17.55%) and Germany (14.17%).

According to Alonso Donoso, technical analyst at the Ministry of Agriculture and Livestock (MAG),the organic products that are most exported are bananas, fine aroma cocoa, CCN51 cocoa, quinoa and sugar cane.

“Currently, organic bananas represent 10% of the total banana production sown in the country: they have 19,082 ha; and organic cocoa represents 3.78% of the total area sown to cocoa in Ecuador: they record 18,879 ha,“said Donoso, based on 2020 figures from the Agency for Plant and Animal Health Regulation and Control (Agrocalidad).

In thisregard, Francisco Miranda, president of the National Association of Cocoa Exporters and Industrialized of Ecuador (Anecacao),cataloged organic cocoa as “a strange line that is walked” and confirmed that its production is still very marginal.

He explained that much of the organic cocoa available is produced in very old farms with outdated agricultural models, in which it is only harvested, which generates low productivity; although he acknowledged that modern methods of organic agriculture are beginning to be applied to crops, with good yields, but these are still isolated cases.

“Much of organic production limits the working methodology of the producer, and this is reflected in very low productivity when modern techniques are not applied,” analyzed the leader, who nevertheless acknowledged that it is a market with great potential and good demand, with improved prices.

The banana case is different. José Antonio Hidalgo, president of the Association of Banana Exporters of Ecuador (AEBE),said that, during the last six years, the export of organic bananas has had an increasing trend.

“At the end of 2020, organic bananas have reached 7.2%, and it is expected to remain above 7% during 2021,” said Hidalgo, who pointed out that the Atlantic coast of the United States is the main destination for the fruit, followed by the north of the European Union, and so far this year almost five million boxes have already been exported.

In this regard, Donoso added that organic Ecuadorian bananas have represented between 90% and 98% of total exports of this type of products to the European Union in the last three years.

However, organic production in Ecuador is not only limited to bananas and cocoa.

There are also 45 operators with processor reach and 13 organic marketers. “In the world and in Ecuador, producers and organic products tend to grow,” donoso said.

He added that as of last April there is a registry of 14,933 producers,wild collectors, processors and organic marketers; of these, 672 operators have an individual registry and 14,261 producers are grouped into a total of 69 group registries among associations, federations, and corporations.

He highlighted that since July 2013, through Ministerial Agreement No. 299,the MAG is the National Authority for the Promotion of Organic Production in Ecuador, which works on the implementation of the Strategic Plan to Promote Organic Production, based on the guidelines of the Inter-American Commission on Organic Agriculture (CIAO),a technical platform composed of 19 member countries.

“With the implementation of the Strategic Plan, the MAG intends to give a new and strong impulse to the integral development of organic agriculture, for sustainable or sustainable growth,” said Donoso, who said that the expectation of the State portfolio is to achieve a greater increase in this activity with a long-term goal, 2030. (I)