Without giving a date, President Rafael Correa said he will insist on Inheritance and Capital Gains laws 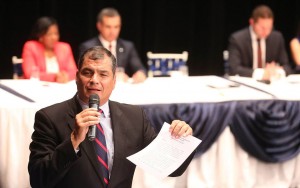 The president gave no date or details of the content, but insisted that his goal is to generate a correct “distribution of wealth and cut illegitimate sources of wealth;” in addition to cut “widespread forms of evasion,” as the creation of trusts or foundations abroad, or the underreporting of the value of goods to pay less property taxes.

Correa recalled that during the national dialogues promoted first by the Senplades and then by the Coordinating Ministry of Social Development important suggestions for the standards have been collected; He added he would like to hear more opinions from mayors about capital gains.

The announcement generated discontent in the private sector. Roberto Aspiazu, executive director of the Ecuadorian Business Committee, said that these statements have “taken them by surprise.” “We believe that right now there are other priorities of the government management instead of think about a couple of bills that once caused a very strong reaction against them,” he said.

For his part, Francisco Alarcon, president of the Chamber of Industries of Guayaquil, said that it is unfortunate to re-discuss these laws, especially “when the economy is going through a difficult time.” He said that “at a time when production needs to be stimulated, they once again talk about laws which are disincentives for the most intimate reasons for risk in investments.”
Translated into English by Pierina Abad
Source: http://www.eluniverso.com/noticias/2015/12/08/nota/5286639/dar-fecha-presidente-dijo-que-insistira-leyes