Works in the hospital Abel Gilbert were inspected by Correa 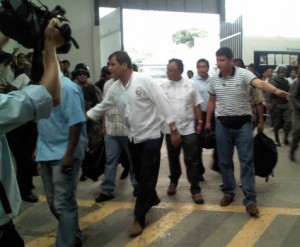 During the visit, Correa was briefed on the progress of the work by Marcelo León, Director of the Contract Service for Public Works (Secob for its Spanish acronym).

The officer said that the remodeling of the hospital, which includes the construction and equipping of two buildings for external consultation and ambulatory medicine and parking lots, as well as the intervention of the fifth and sixth floor of the hospital, will be completed in late 2015.

So far the work has an advance of 74% and $ 84 million have been invested reported León.

Meanwhile, Correa considered a delay in the works and the lack of green areas, by which he admonished the officer.