Ukraine’s government has been taken over by “a band of neo-Nazis and ultra-nationalists, who are already aiming to get the presidential chair,” said the deposed Ukrainian President Viktor Yanukovych, at a public meeting in the Russian city of Rostov-on-Don.

Yanukovych also reiterated that he remains the legitimate head of Ukrainian state. “I want you to remember that I remain not only as the one legitimate president of Ukraine, but also his supreme commander in chief. I’ve not given up on my faculties and I have not been removed according to the procedure laid down in the Constitution,” he said.

The president stressed out that the elections called “by the Little group that seized the power as a result of a coup” are “illegal,” “do not correspond with the Constitution of Ukraine” and in his opinion,”will be carried out under the total control of extremist forces.”

He also announced plans to return to his country “if circumstances permit it,” for which, optimistically predicts, “I will not have to wait that long.” 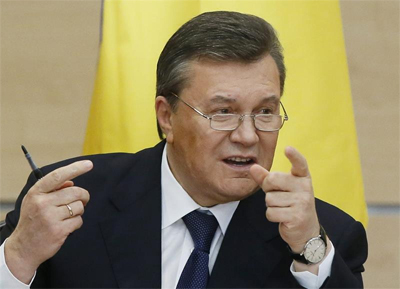