Yasunidos presents today their signatures to the CNE 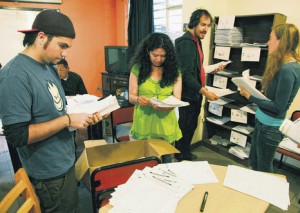 The Yasunidos collective presents this midday over 700,000 signatures to the National Electoral Council (CNE), with the objective to make a referendum to prevent oil exploitation in the ITT.

Members of this group will close this stage of collecting signatures, which extended for six months, with a march that was scheduled at 09:00 in the El Arbolito park center of Quito.

Since yesterday afternoon, the group set up their tents in the park in order to oversee the signatures they have collected. In this last week, Yasunidos redoubled efforts to organize the thousands of forms that have been received during these months.

The Constitutional Court will have 20 days to qualify the constitutionality of the questions raised.

Río de Janeiro was scene of clashes over evictions