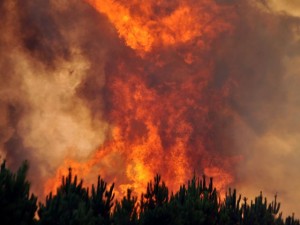 Thousands of people have been evacuated in Valparaiso, on the central coast of Chile, after a large forest fire that has spread over several hills of the city.

The fire so far has left 16 dead and several people have suffered smoke suffocation effect.

The fire started on the Saturday afternoon, at approximately 16:00 local time, and it spread up to damage more than 500 homes.

Local authorities said that the fire, which already covers around 270 hectares, started on the road La Polvora and spread to populated areas of the hills La Cruz, El Vergel, Las Cañas and Mariposas.

The President of Chile, Michelle Bachelet declared the area in state of emergency.

Aid reaches to Quininde, which is on alert for flooding