The environmental group YASunidos calls all the people who signed on behalf of their cause of keeping the oil inside the Yasuni, to help filling a template in order to file an habeas data resource to the National Electoral Council (CNE for its Spanish acronym) and so finally knowing what happened to their signatures.

The activists drafted a petition letter supported by Article 66 paragraph 23 of the Constitution, which grants the “right to address individual and collective complaints and petitions to the authorities and to receive care or reasoned answers…”

Thus YASunidos asks the CNE to be allowed to know and access documents and files of the person signing the letter and to indicate if the signature was invalid and why.

According to Patricio Chavez, spokesman for the activist group, also revealed that they still wait the response of the CNE on the challenge on the results of the signature verification process, made in recent days. On its behalf, the CNE said the report on the challenge would be ready next week. 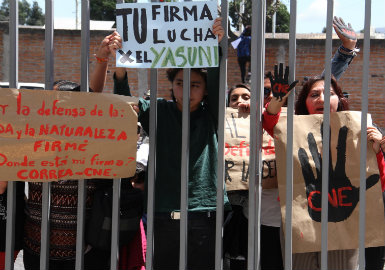 Last April 18, several activists went to the former market of the Armed Forces to protest for the signature verification process along with banners, drums and black painted hands.