In an attempt to sway the demonstrations that threat to overthrow him from the government, the president of Yemen, Ali Abdala Saleh, proposed a new constitution that allows a new electoral system by the end of the year. The proposal of Saleh is trying to convince the parties of the opposition that the government supports the national unity. 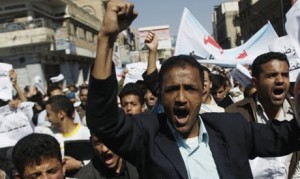 would give all the executive powers to a Government elected by the Parliament. However, the demonstrators’ representative, Mohamed Qahtan, stated that this initiative is not enough and it is too late. Last week, Saleh rejected a plan that forced him to leave the government by the end of the year, the proposal had the condition that the demonstrations would cease immediately end after his resignation.

Saleh has been in the government for 32 years, recently the President of Yemen informed that he will not run for the presidency in 2013. The demonstrations have been encouraged by the revolts in Egypt and Tunisia. Last month the opposition forced him to back down with the government negotiations.

Death toll in Japan is expected to exceed 1,000