Zimbabwe requires to sell ivory to preserve the environment 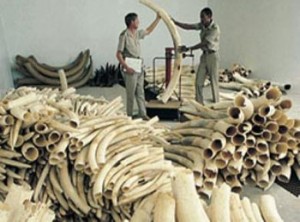 Zimbabwe requires to sell ivory to preserve the environment

The government of Zimbabwe needs to sell Twelve tons of ivory and rhino horn to finance the environment conservation of the country, but the Convention on international trade in endangered species of wild Fauna and Flora banned the trade of these products.

The Environment Minister , Salvador Kasukuware, said today Wednesday, March 5th, according to the local newspaper Chronicle, that he has saved in his Department seven tons of ivory and five tons of rhinoceros horn of  in vaults.

Trevor Lane, director of Bhejane Trust, an independent conservation agency, supported the sale of ivory and rhino horn “provided that it is done in a transparent manner and under strict conditions”.

As he recalled, some of the horns come from an official program that removed this material from animals to deter poachers as well.