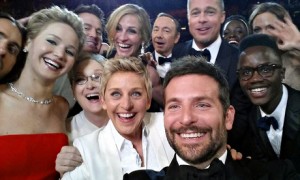 Maurice Levy, Chief Executive Officer of Publicis company, which is in charge of the advertising campaign for Samsung, said during the 51st edition of the MIPTV audiovisual trade show, held in Cannes, that the selfie taken by the hostess Ellen DeGeneres with some actors during the delivery of the Academy Awards last February, has an aggregate value of approximately $ 800 to $ 1,000 million.

This is due to the worldwide repercussion of the photo, since the actors as Meryl Streep, Bradley Cooper, Brad Pitt, Julia Roberts appear in it, the selfie attracted media attention to be seen by 43 million people. Samsung was also behind the self-portraits of President Barack Obama and baseball player David ‘Big Papi’ Ortiz. `It’s something we did for Samsung. We are. Those two famous selfies were made ​​by our equipments, “said the representative of Publicis, who gave no details about whether DeGeneres was paid or not.