10.6 million internet accounts are in the country

With 52.5% of service penetration, Ecuador exceeded the 45% goal set forth in the Information and Communication Technologies Plan. Access to Internet services increased in 2017, registering 10.6 million active accounts, a figure that exceeds the 9.4 million posted in 2016, reported on Tuesday the Ministry of Telecommunications (Mintel) in its annual accountability.

This figure implies that the country exceeded the goal of 45% in mobile broadband penetration envisaged in the Information and Communication Technologies (ICT) Plan, reaching 52.5%. In 2016, 55.6% of the population had an Internet connection, while last year 58.3% had this service. The data shows that 8.8 million internet accounts are mobile and only 1.8 million are fixed 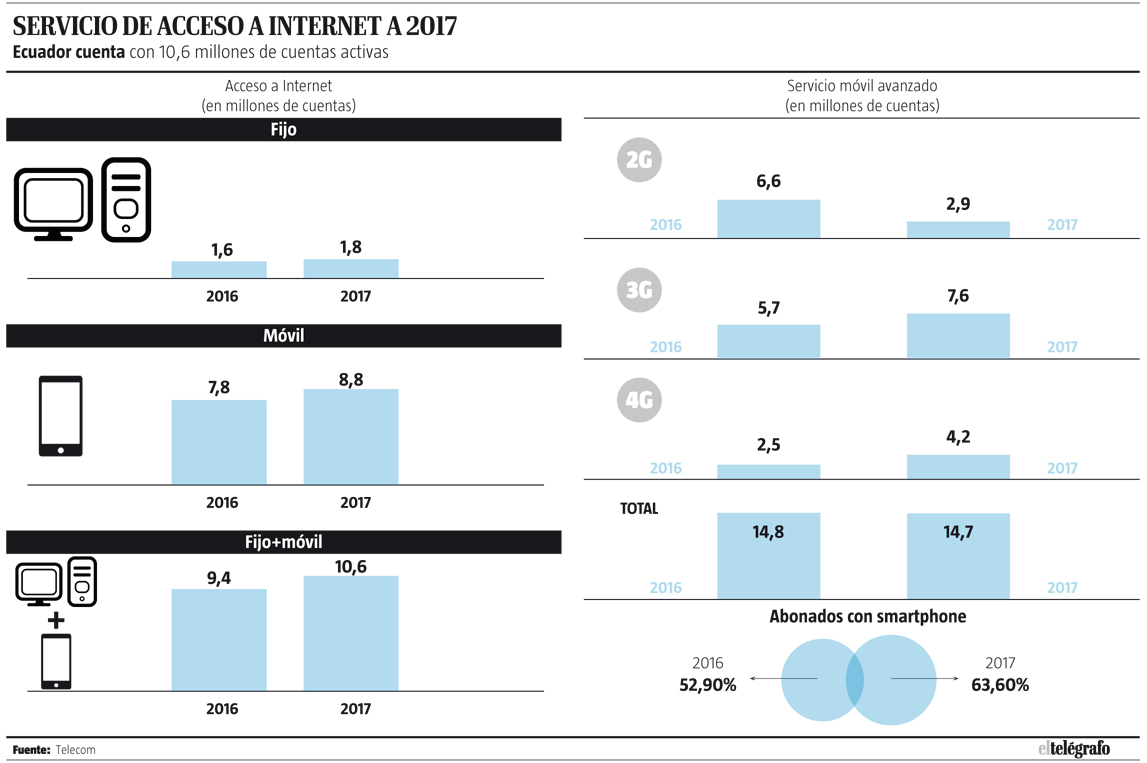 In addition, subscribers with smartphones went from 52.9% in 2016 to 63.6% in 2017, which is why, according to the Minister of Telecommunications, Guillermo León, in 2017 the penetration of ICT services in the region increased and improved population and increase the development of the information and knowledge society.

“Our main objective is to consolidate the information society, allowing new communication technologies to be at the service of citizens, offering them a better quality of life,” said the State official.

Minister León highlighted that the results of last year allowed Ecuador to increase nine seats, in relation to 2015, in the Internet Affordability Index, a study conducted every two years. In 2017, Ecuador ranked sixth among 58 developing countries. The country is surpassed by Colombia, Mexico, Peru, Malaysia and Costa Rica.

On the other hand, regarding the work of digital inclusion to address vulnerable sectors, the Secretary of State explained that continental Ecuador has 854 community “infocentros” located in 735 parishes of the country, which at the rural level means a coverage of 74%.

In addition, 10 “infocentros” work in the centers of social rehabilitation. He also stressed the agreement with the Federation of the Blind of Ecuador (Fence), so that blind people have the possibility of accessing information and communication technologies through integrated computer systems, which until the end of 2017 reached 762 infocentros. (I)