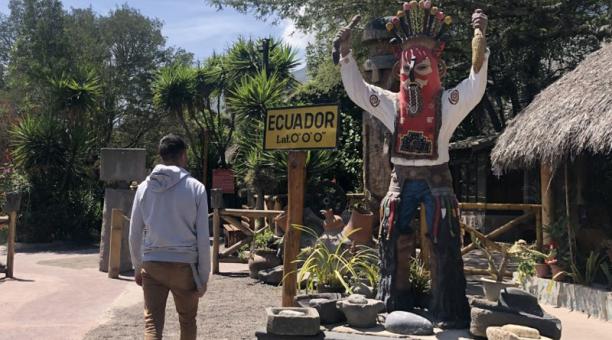 This collection of archaeological pieces and other relics was delivered by Jorge Gabino Guerrero to the National Institute of Heritage and Culture (INPC).

Of the 392 objects, 101 were declared cultural property and were given to the museum .   Currently, all the pieces go through an inventory and organization process. The intention is to assemble a permanent sample with most of the articles and complement other areas of the museum with the remaining objects.

The Waorani House or Chichería are two spaces to which a part of the historical pieces is intended to be carried. This was explained by Horacio Loyola, Communication Manager of the Intiñan Latitud Cero Museum.

“We are going to give it the importance that the pieces deserve, in each space that was created with original materials ,” Loyola said, referring, for example, to Chichería.

Lilibeth López, one of the museum’s guides, explained that this little corner was suitable as an old house where chicha was prepared, in wood burning stoves . The house was designated as the first visit point of the museum.

La Chichería was built with bahareque and straw, so that it resembles a modest traditional house in the rural areas of the Andean region.

In its interior a stove with its respective pots and clay pots of different sizes was adapted. Cobs of yellow and purple corn were hung from the walls and columns, and a corner was reserved for the care of guinea pigs preparing to eat.

The Waorani House, a kind of replica of a typical house of the Waoranis communities (that live in the Amazon) and that was built precisely by residents of this ethnic group. Photo: Andrea Medina / THE COMMERCE

Another of the spaces where it has been planned to take the donated pieces is the Waorani House, the second point of visit of Intiñan.

This place was created as a kind of replica of a typical dwelling of the Waoranis communities (who live in the Amazon) and was built precisely by residents of this ethnic group.

Inside this house made with materials from the Amazon jungle were placed other objects that were used many years ago and others that are still used among the Waoranis , for hunting, cooking or rest.

In addition to an exhibition of articles, photographs and maps that show the areas where this community inhabits, crafts made by Amazonian women are also offered at the Waorani House .

Among the pieces there are 26 clay bakers, baskets, grinding stones, among others. Photo: courtesy Intiñan Museum

Until there came Mencany Nenqui, president of the Waoranis Women’s Association of the Ecuadorian Amazon , to talk about the work with seeds or chambira and offer them to visitors and tourists.

Loyola explained that with the delivery of the pieces it is sought to give a new added value to this museum, known as the exact place where the true Half of the World passes .

“The donation is a product of the good relations we have had with the Heritage Institute, because we made the request for the objects, ” Loyola said.

The ultimate goal is for the 101 pieces to be part of a permanent exhibition of the museum, which seeks to show at least a piece of the country’s Sierra , Costa and Amazon cultures.

In addition to these exhibitions, Intiñan’s main attraction is the solar clock and a line where GPS marks latitude 00 ° 00’00 ”.