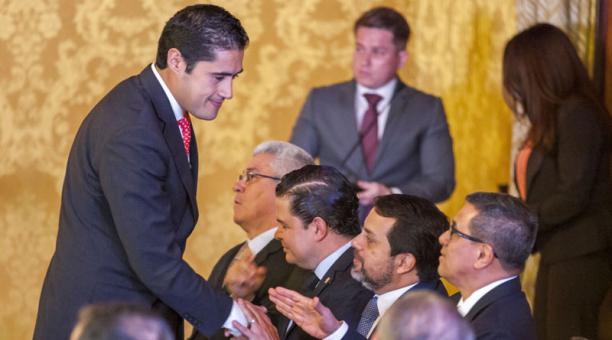 The Ministry of Finance will send the Executive the draft project to repeal Executive Decree 1218, which allowed the previous Government to eliminate commitments from state entities from the calculation of public debt and thus expand its indebtedness margin.

Richard Martinez, Minister of Finance, said that today, Monday, May 21, 2018, the document is expected to be sent. The decree, of October 2016, ordered that only the consolidated debt be taken into account to calculate the amount of public debt of 40% allowed by law.

With this legal reform, the previous Regime excluded from the calculation of indebtedness obligations of the State with public organizations, such as the Ecuadorian Institute of Social Security (IESS), the National Financial Corporation (CFN), among others.

Carlos de la Torre, former finance minister of Lenin Moreno’s government, had defended the consolidation of the debt, since according to him the public internal debt was like owing the wife. “With it I can fix in any way.” The decision of the new head of Finance obeys one of the provisions issued by the Comptroller last month, in the special examination that was made to the public debt.

The control body concluded that the new calculation method allowed the previous government to artificially reduce the amount of public debt by 12 points. Until last January, before the Comptroller’s Examination was issued, Finanzas recorded an amount of consolidated internal debt of just USD 889.4 million.

Since that month, the agency had not updated the figures until last Thursday, when the Finance Minister presented a figure of aggregate domestic debt, which until April stood at USD 14 782 million.

With this, USD 13 892 million are included in the calculation of internal debt. Jaime Carrera, secretary of the Fiscal Policy Observatory, said that most of this item -USD 8,000 million- corresponds to State commitments to Social Security, while “some USD 3,600 million are for debt coming from loans that made the Central Bank to the State. They are medium and long term bonds.”

For Alberto Acosta Burneo, editor of Análisis Semanal, the government should never have eliminated the debt with the IESS, because that money belongs to the affiliates and retirees.

When this decree was approved, public debt stood at 38.4% of GDP and thus approached the limit of 40% allowed in the Planning and Public Finance Code (Coplafip). According to the Comptroller’s report, this allowed for the creation of “new debt operations, without observing the limit allowed by law.”

Ramiro Crespo, member of the oversight committee of the Comptroller’s Examination, explained, furthermore, that by the hierarchy of laws “it was not possible for an executive decree to be above what is dictated by a law, such as Coplafip”.

According to the Comptroller’s Office, the Executive Decree is contrary to the provisions of Article 123 of the Coplafip, which states that public debt comprises the public debt of all entities, institutions and public bodies. The previous Government maintained that the consolidated debt was calculated according to the recommendations of the manual of the International Monetary Fund (IMF).

However, the agency said on April 20 this year that the method they use is not the same as that implemented by the Ecuadorian Government with Decree 1218. Finance included in its debt report, in addition, other items related to the oil sector, among them the anticipated sales of oil, in compliance with another of the provisions of the Comptroller’s Office in its report.

It also includes commitments for the accumulation of contracts for the rendering of petroleum services and current liabilities of Petroamazonas. (I)

Ecuador and Russia agree to meet the bilateral Business Council