13 CDP guides of Quito face detention due to massive escape 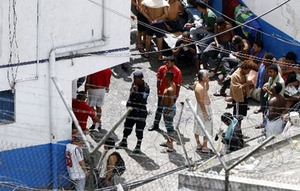 Last Monday, prosecutors opened an investigation against fifteen prison guards, five national police and the former director of the Provisional Detention Center (CDP) of Pichincha, due to the escape of 56 convicts that occurred last Sunday in Quito.

The prosecutor Juan Carlos Nunez said the 21 detainees are suspects of the crime of evasion, considering that they acted negligently, and conspired with the fugitives. So far 19 convicts have been recaptured, according to sources of the Judicial Police of Pichincha.

The 15 guides will spend 30 days in custody, while the prosecution process is made. Meanwhile the families of the guards said they were only doing their job.

Currently several irregularities have been found in the prison, among them is that the minimum security prison has a capacity for 350 people and currently hosts 1500 inmates. It was also discovered that one of the heads of the prison had sent letters requesting more personal. Finally the day of the escape five guards of the 24 skipped work that day.

Correa can not use his weekly report to introduce candidates