What used to be an internationally renowned café, restaurant and gallery, today is a pile of cardboard boxes and disassembled furniture , ready to be loaded onto a moving truck. 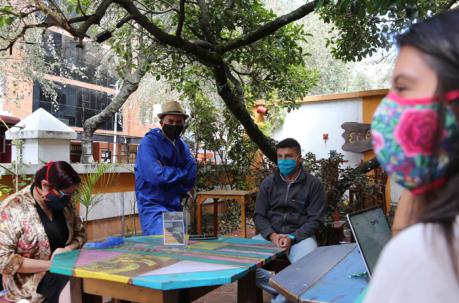 “It is the work of 15 years, which unfortunately we have had to lift because the authorities do not give us hope that this will be reactivated, ” says Adriana Alomía, administrator of Galería Ecuador. Its four stores , located in the most touristy sectors of Quito, were closed due to a drastic decline in sales since the pandemic began.

“It was not just a business , but a showcase to show 300 artisans , the best in the country,” he adds, while vacating the La Mariscal store.

In this tourist district, the list of businesses that have closed is endless: restaurants, cafes, bars, discos, chocolate shops, galleries, hotels, tourism agencies; and even a bank and a cell phone company built their branches .

“This must be the worst hit neighborhood in Quito,” says Paola Romero, resident, former president of the Neighborhood Assembly and who, together with other businessmen and neighbors, is currently looking for a way to reactivate commercial activities . “In the midst of this crisis, the neighbors see an opportunity to move the neighborhood forward,” he warns.

The plan is to launch La Mariscal Laboratory in the second week of September . “It is similar to what we already did in Cumbayá, ” says Romero. In this sector, food outlets and other businesses took the products to the sidewalks. The Mayor’s Office pedestrianized certain streets so that activities can take place outdoors. “The idea is that the families who stopped visiting La Mariscal, because before they had no offer , can now enjoy the architectural beauty and the cultural and gastronomic offer,” says the resident.

Quito Tourism points out that 13% of the tourist businesses in the city closed, most were located in the Historic Center and La Mariscal.

For Santiago Guarderas, vice mayor, the economic situation of businesses is a “priority issue for the Mayor.” He anticipated that a work team prepares an economic reactivation plan. One initiative is that businesses such as restaurants and coffee shops can use public space. “Certain areas of the city are going to be pedestrianized , so that people can attend without risk and consume in these places.”

Another initiative that, according to Guarderas, is being analyzed by Mayor Jorge Yunda is the reduction of certain fees and taxes . “At the moment a team is reviewing whether the plan is feasible, because it must be taken into account that the Mayor’s Office also has an economic deficit .”

For example, the payment of annual patents , which is a tax for businesses or individuals to carry out their economic activities , has fallen by 37%. That is, between January and July, the Mayor’s Office collected USD 30 million, in the same period of 2019 it was 47.8 million.

The payment for the authorization fee for the operation of premises also fell. Until July 31, USD 861,285 have been collected, while in 2019 it was 1.6 million.

Daniel Ochoa, administrator of El Cafecito, points out that its current sales do not exceed 30% of the turnover before the pandemic. Renán Espinoza, administrator of Mongo’s, says that it went from having 14 employees to 3. For Luz Albán, coordinator of the El Útero cultural center, the situation is no better. He says that they are working at a loss and that this pandemic has left him a debt of USD 8,000 in taxes, rents and services. “We are resisting, but we need the authorities to help us with concrete plans,” asks Ochoa.

1’822.615 students start classes in the Sierra and Amazon from their homes