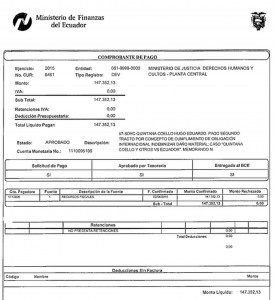 Two years ago, the Inter-American Court of Human Rights (IA Court HR) ordered the Ecuadorian State to pay about $ 14.5 million in favor of 27 former judges of the former Supreme Court of Justice (CSJ for its Spanish acronym) and 8 members of the extinct Constitutional Court (TC), who were dismissed by the Congress in 2004.

Of that amount, $ 12.3 million correspond to the first, says the report submitted by the Attorney General’s Office to the Assembly.

The agreement among the parties was to make the payment in three installments. The last will be in March next year.