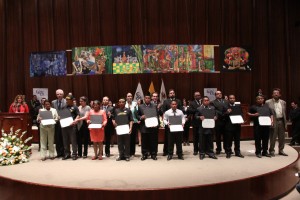 Presentation of accreditation and diplomas to national heroes and heroines.

In the Legislative Headquarters on Monday, 145 Ecuadorians were credited as National Heroes and Heroines (121 civilians, 19 soldiers and five policemen), who will receive a pension of two unified basic salaries, housing, scholarships, among other benefits granted by the heroes law.

Among the 145 accredited there are also 85 Aruntam indigenous, who participated in the Cenepa War of 1995.  In addition to veterans of the armed conflicts with Peru in 1941, 1981 and 1995. The qualification process was made by the Credentials Committee of Heroes appointed by the Council of Citizen Participation and Social Control (CPCCS), which selected from 3,138 applicants the 145 new Heroes and Heroines.

The president of the National Assembly, Gabriela Rivadeneira, highlighted the value of each declared hero and heroine . “Those who have performed extraordinary acts of courage, solidarity and dedication, even at the risk of his own integrity, even saving lives, protecting institutions or defending the dignity , the territorial sovereignty of the state.” She pointed out that this recognition process for Ecuadorians full of conviction and high dignity is unprecedented in the history of the country and the first in Latin America, which consolidates the society of good living.