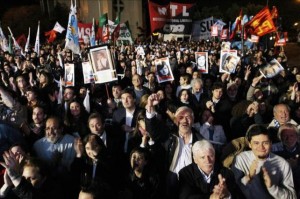 Fifteen civilians and retired military officers were sentenced on this Friday October 24 to life imprisonment for violations of human rights committed in a clandestine detention center in Argentina’s last dictatorship (1976-1983), the court informed.

The accused were tried by an oral tribunal de La Plata (62 km south of Buenos Aires) by the use of torture and the murder of 135 victims, including the daughter of Estela de Carlotto, leader of the Grandmothers of Plaza de Mayo.

At trial were investigated the violations of human rights committed in the clandestine detention center known as “La Cacha” which ran on the outskirts of La Plata.