Three and a half months have passed since the life of the Ibarra family changed completely. On May 20, 2022, Xavier, 15, was shot in the skull during an assault. 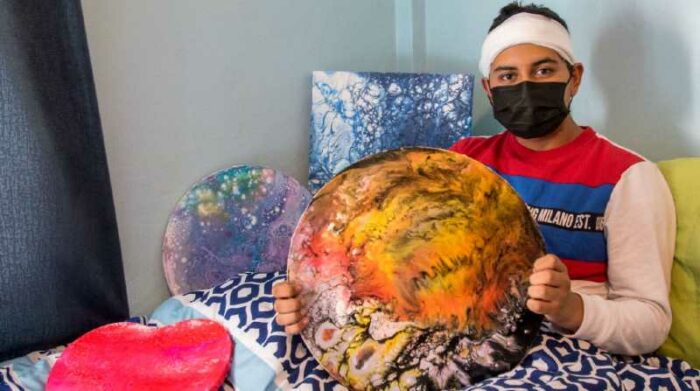 Xavier Ibarra, 15, makes paintings as a treatment after being hit in the head with a rubber bullet as a result of an assault.

Since that day her parents have exhausted their economic resources to continue with their therapies. His father, Jorge Ibarra, says that the process has been very painful and costly. The impact of the bullet caused Xavier to have facial paralysis. The student also lost his mobility. To walk, he relies on a cane.

Between tears, Ibarra says that he needs USD 10,000. It is the cost of surgery that is required to rebuild your child’s skull. Additionally, she must continue with ozone, acupuncture and motor therapies.

To improve his motor skills and calm his depression, Xavier began painting therapy. Now he sells his works to raise funds and continue treating him.

The benefit generated by the therapies is fundamental for the emotional part of the adolescent. At first, he was depressed because he couldn’t go to school, Xavier’s father mentioned.

He also appeals to the solidarity of citizens to donate paints, brushes, pictures, etc.

The father says that, through YouTube videos, he was learning techniques to translate into paintings. His favorite colors are blue and white because they convey peace to him.

The student was shot in a robbery

Xavier Ibarra was leaving class with his classmates when he was intercepted by two men outside his school in Quito. The teenager did not resist the robbery but seeing that one of the strangers pointed at her partner, he decided to defend her.

In retaliation, one of the armed men shot the student in the skull. Seeing the attack, bystanders joined in to capture the suspects. The suspects continue until September 7, 2022, in the custody of the National Police.

The father narrated that that day his son was transferred to the Enrique Garcés South Hospital but did not receive medical attention due to lack of supplies. In that health home they would only have given him first aid, but they did not give him an ambulance or a tomography, says the victim’s father.

His relatives had to transfer the teenager to a clinic, located in the north of the capital, to save his life.

How to help the Ibarra family

Also, if you want to help with a financial contribution, you can do so in the savings account number 2205682281 Banco de Pichincha, which belongs to the parent.

When he paints, he lets his imagination fly and forgets about that event that marked his life.

“One of the purposes of the painting is to raise funds to continue my treatment and also motor skills,” says the teenager.

In shelter, Ecuadorian boy found on the US border