A new phase of the 2021 general election calendar has concluded. Until yesterday, Sunday, August 23, 2020, 18 presidential pairs were elected, during the primary election period. 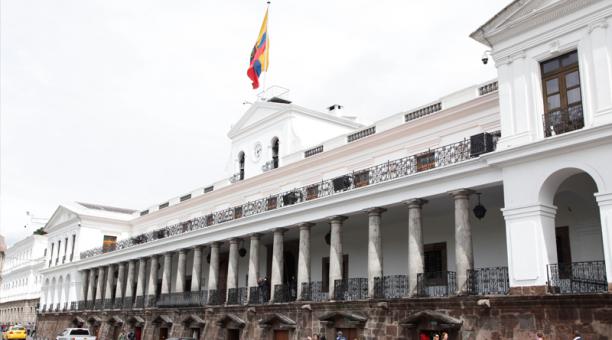 Yesterday, SUMA, Libertad es Pueblo and the Christian Social Party defined their cards for the contest.

From tomorrow until September 3, the period to register alliances opens . If two movements come together for the race, the list of candidates who came out of the primaries may vary. For example, someone appointed to the Assembly, in alliance could be located for the Vice-presidency or another dignity.

The president of the National Electoral Council (CNE), Diana Atamaint , confirmed that this is allowed by the regulations for the registration of candidacies . “There is no impediment, as long as the political organizations agree.”

In addition, applicants appointed at the weekend have 10 days to personally accept their candidacy at different CNE headquarters.
Atamaint explained that it is a “non-delegable” procedure. However, not all movements acted under this regulatory provision .

Centro Democrático , a movement that groups correísmo , elected the Andrés Arauz-Rafael Correa pair, despite the fact that the former president has a preventive prison order and was sentenced in two instances to eight years in prison for bribery, in the Bribery case. In addition, its list of national assembly members supported Pablo Romero , a former intelligence chief under the previous regime, who was sentenced to nine years in prison for the kidnapping of Fernando Balda.

Both Correa and Romero must accept their candidacies in Quito, which is complicated, since the former remains a fugitive in Belgium and the latter is in prison.

Enrique Lesscal , director of the movement, argues that neither has an enforceable conviction. His strategy will be to present a power of attorney, to try to complete the acceptance process without the presence of the applicants.

However, Atamaint reiterated that this is not possible. The option that would remain would be to replace those designations to complete the process, but the president of the CNE explained that the replacement must also have participated in the primaries.

In Correa’s case, the Andrés Arauz-Carlos Rabascall binomial was also registered for the Presidency and Vice-presidency , so the latter could replace him.

Gustavo Larrea, a 64-year-old former minister of the previous Government and former deputy, is the presidential candidate of Democracia Sí, the movement he leads. His running mate is Alexandra Peralta, an economist who defines himself as a “fighter in social projects for agriculture”.

Guillermo Lasso, a 64-year-old former banker, and the Cuenca doctor Alfredo Borrero form the presidential binomial of Creo. It is the third time that Lasso has run for the Presidency, a dignity for which he already competed in 2013 and 2017. Three years ago Lasso was surpassed with a 2.3% vote by the current President Moreno.

For the third time, Colonel (r) Lucio Gutiérrez, 63, will seek to return to the Presidency, from where he was overthrown by the so-called ‘outlaw rebellion’ on April 20, 2005. A first attempt was made in 2009 and another in 2013. This time, his running mate is David Norero, a lawyer.

The binomial of the Social Justice movement is Fabricio Correa and Marcia Yazbeck. Correa, a 61-year-old mechanical engineer, gained visibility in the political sphere in the government of his brother, Rafael Correa, of which he ranked among the opponents in the midst of a contract scandal.

The Pachakutik movement bets on Yaku Pérez and Larisa Marangoni as its candidates for the Presidency. The designation came amid a split in the Confederation of Indigenous Nationalities (Conaie). However, in the evening it was confirmed that Marangoni declined his application for that group.

César Montúfar and Julio Villacreses will form the binomial of the Concertación movement. Before running for the Presidency, Montúfar was a candidate for Mayor of Quito and was in third place in 2019. He was a deputy in 2009. He is 55 years old. Villacreses, on the other hand, was coordinator of the Manabí Anticorruption Commission.

The businessman and one of the main leaders of Barcelona Sporting Club, Isidro Romero, has the backing of the Avanza movement as a candidate for the Presidency of the Republic. He is 78 years old and in 1996 he was a deputy of the PSC. His running mate is Sofía Merino, an activist and political consultant.

At 35 years of age, Andrés Arauz is the youngest candidate for the Presidency. His running mate will be Rafael Correa. They have the support of the Democratic Center. In the previous Government, Arauz held various positions, he was Minister of Culture and Undersecretary of the Planning Secretariat.

Gerson Almeida, 46, founder of Iglesia Cristiana Ministerio Bethel Casa Apostólica and expert in theology, is the presidential candidate for Ecuatoriano Unido. He has also represented pro-life and pro-family movements in the country. His running mate is Martha Villafuerte.

Paúl Carrasco, Together We Can

The Juntos Podemos movement selected its leader Paúl Carrasco Carpio and Frank Vargas Anda as its pre-candidates for Carondelet. For three times, Carrasco, 49, was the Prefect of Azuay. In 2016 he led, along with other politicians, the unit that sought to face the presidential elections.

Assemblywoman Ximena Peña and the former secretary of Communication of Correísmo, Patricio Barriga, were designated as the presidential binomial of Alianza País (AP). Peña, a 44-year-old commercial engineer, is currently the coordinator of the ruling bloc. She has been a legislator for two terms.

The SUMA movement raises Guillermo Celi and Verónica Sevilla as its candidates for the Presidency and Vice-presidency, respectively. Celi, a 44-year-old attorney, currently holds a seat in the Assembly. He was a trustee of the Municipality of Portoviejo. Before, he was a professor.

Since 2009, he has actively participated in the country’s politics. She has held positions of councilor, constituent assemblyman and legislator. At 41, Cristina Reyes has the support of the PSC for the Presidency. Diego Salgado is her partner on the ballot. The primaries were passing at the end of this note.

The pre-candidate for the presidency for Libertad es Pueblo occupied the prefecture of El Oro in 2014. He is Esteban Quirola, a 41-year-old economist and businessman. In the 2019 sectionals he sought re-election as prefect, but was defeated by Clemente Bravo. He will be accompanied by Juan Carlos Machuca.

Miguel Salem Kronfle, former secretary general of the administration of the Government of Abdalá Bucaram, is the presidential candidate of Fuerza Ecuador. He was a legislator in 1996 and for 40 years he has been engaged in activities as an industrial entrepreneur. The formula is completed by Gustavo Bucaram Ortiz, Abdalá’s brother.

The Executive Council of the Democratic Left Party (ID) chose Xavier Hervas as its candidate to seek the Presidency of the Republic. The announcement was made official after 8:45 p.m. this Sunday, August 23, 2020. Hervas, 47, is a businessman from Guayaquil, an engineer in agro-industrial production. He has been manager of companies in the productive sector.

The formula of the Amigo movement is made up of Pedro José Freile and Byron Solís Figueroa, to seek the Presidency and Vice Presidency, respectively. Freile is a lawyer, an expert in public procurement and projects. He also has a BA in political science and is fluent in English and German. In addition, he has collaborated with the Society for the Fight Against Cancer (Solca).

The presidential binomial of the Construye Movement (ex Ruptura), in which the trusted officials of President Lenín Moreno are active, is made up of Juan Fernando Velasco and Ana María Pesdamientos. Velasco has been in charge of the Ministry of Culture since June 28, 2019. While Ana María Pesante is the executive director of the Observatory and Promotion of the Violet Economy (OPEV).