20,000 signatures for non-extradition of the young Ecuadorian Diego Puma 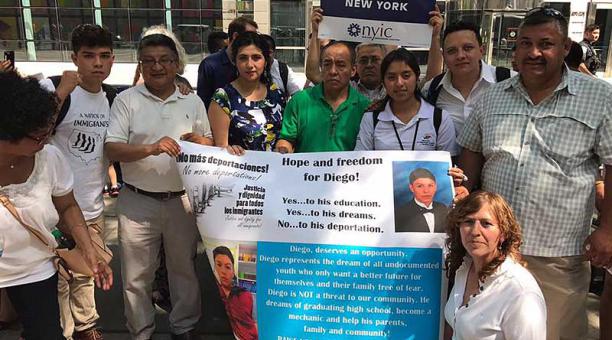 The Care2 Petitions organization, created to bring together activists from around the world and file lawsuits online, already has 20,144 signatures out of the 25,000 that it requires to file a petition to stop the deportation process of 19-year-old Ecuadorian Diego Puma .

Student at Ossining High School in Westchester, New York, about to graduate and nearing his ‘prom’ (graduation party), was arrested on June 8 and locked up in a state detention center by the Office of Immigration and Customs Enforcement (ICE). By order of the judge, he is in the company of his mother, Rosa Macancela, who was arrested the day before.

He was “arrested by immigration agents on prom day. He was seeking asylum in the country due to the fear he had on violent gangs in his native Ecuador”, said some members of Neighbors Link, an organization dedicated to the rights of immigrants in the United States.

The mother and her son were arrested by ICE in 2014 when they crossed the border with Mexico. There they asked for asylum and were allowed to stay in the United States until Justice determined their future. On November 16, the Federal Immigration Court signed the deportation order.

As reported by Puma’s cousin, Gabriela Macancela, to El Diario, a Spanish-language newspaper with more action in the Puerto Rican community, “Diego was taken on Thursday at 07:30 in the morning, and was taken away as if he was a criminal. ”

Ossining Mayor Victoria Gaerity, who said was a witness of the arrest, referred to this as “disturbing and surprising,” according to media Lohud.

“Wake up. The cops are here again. They are coming for me” Puma told her cousin.

“They grabbed the door by force and they called my cell phone and they told me that if we did not deliver Diego, they would take us all and we would all pay, and we had only half an hour. My cousin heard that, hugged me and said ‘I’m going, tell daddy to grab the dogs’ (he had taken them to a walk before). He surrendered so that they would not get any of us” added Gabriela Macancela to El Diario.

Puma’s case went to the United States Congress. Democrat Nita Lowey officially requested a suspension of the order to ICE under the concept that it “will have a negative effect” in the community relations with the immigrants. (I)

The recession erodes entrepreneurship, but does not lower Ecuador from the peak