$ 2,800 million will come from China, according to Vice President 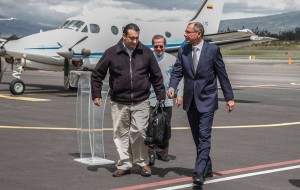 Vice President Jorge Glas said yesterday that Ecuador will receive between this month and February 2016 about $ 2,800 million by loan disbursements from China. The announcement was made after returning from his three-day tour in the Asian country.

At the same time, Finance Minister Fausto Herrera said that of that amount, about $ 1,000 million could arrive this month, which would serve to pay suppliers, especially builders.

Additionally, Herrera confirmed that the money for the payment of global bonds 2015 has already been reserved and the payment of salaries and bonuses is currently being accrued.

These obligations account for Ecuador an outflow of approximately $ 1,900 million until December 15, ie in five days. This, despite the fact that the Treasury account had only $ 479 million in December 4.

Glas said they are analyzing a proposal by a consortium of Korean and Chinese companies for the financing of the Pacific Refinery, whose cost would be $ 10,000 million.

The private sector seeks ways to address the economic situation