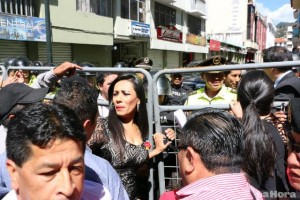 The Court of Justice of Loja on Monday imposed a sentence of 30 days in prison to Loja’s Councilwoman Jeannine Cruz Vaca, after facing a lawsuit filed by the mayor of Loja, Jose Bolívar Castillo, for a tweet posted by Vaca.

The Councilwoman had tweeted last September, a text in which she asked the mayor “to stop lying.” Around 14:00 today the audience took place in Loja.

The hearing, of confidential nature, took place in the midst of a strong cordoning of the National Police, that besieged the premises of the Superior Court of Loja.

According to reports, Vaca was was fined with a 25% of the minimum wage.