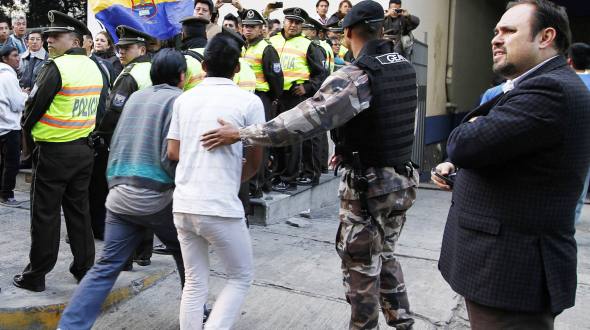 The Judge of Criminal Guarantees, Daniela Mayorga, released 39 students arrested in the protests of September 18 , four were found direct authors, 11 will continue in the process and 6 were not accused by the Prosecutor, Javier Bósquez, of the 60 people processed of Mejía High School .

The 39 students who recover today, October 3, their freedom admitted to being accomplices to the crime of causing damage to another’s property and must meet community works and not to relapse in a maximum period of two years, according to the referred in Article 631, articles 5 , 7 and 9.They shall also pay $ 60 to cover damages valued at $ 3,700, caused in roads, houses and a police patrol.

The Prosecutor accused 16 of the 60 defendants of direct perpetrators of the offense under Article 204 of the Integral Criminal Code (COIP for its Spanish acronym), of which 11 have refused entitlement to shortened trial, and the remaining five were sentenced to two months imprisonment in prison No. 4 of Quito, but one of them, for his disease condition will recover the freedom immediately, the Judge determined.