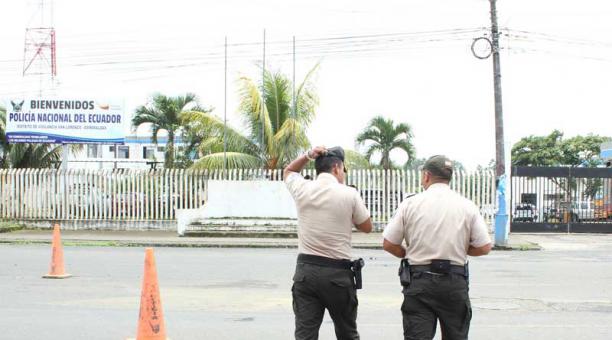 The evaluation process for the police working at the border has the first advances. The General Inspectorate has a road map that will be followed to evaluate 5,000 officers.

This group includes those who currently operate in Esmeraldas, Carchi, Imbabura and Sucumbíos, and the uniformed workers who worked in that bordering zone with Colombia in the last five years.

The idea is to detect if agents have links with organizations dedicated to drug trafficking or provide information related to operations or investigations. Those who are involved in irregularities will be separated and their cases will go to the judicial system.

For all the work, the police formed integrated teams with polygraphists, psychologists and technicians who will visit the border areas and perform the exams. In the case of Esmeraldas, meetings were held at the end of April between the authorities of the Ministry of the Interior, officers and troop personnel.

In those meetings, the commanders explained that four tests will be taken. The first is the polygraph or lie detector. Agents must answer if they ever offended or collaborated with the criminal networks that operate on the border. The use of this device is once again an important point in the Police. Last July it ceased to be “determinant” for the selection of new police officers.

A second test is the socioeconomic analysis of the agents. There, it will be evaluated if there are irregularities in the patrimony of the policemen or their relatives. The intention is to detect if they have benefited from revenues from illegal activities.

The third test has to do with psychological tests and the fourth is a toxicological test, to know if the staff has dependence on drugs. These evaluations will be carried out in special to the agents of special units of Intelligence and Counternarcotics. Since 2012, the so-called confidence tests have already been applied. But this year the commander of the Police, Ramiro Mantilla, warns that the processes will be more rigorous due to the growth of attacks on the northern border, where this moment operate more than 1,900 troops.

In areas such as San Lorenzo, those evaluated will be members of elite bodies, especially the Intervention and Rescue Group (GIR), the Operations Group (GOE) and the Anti-Narcotics Mobile Special Group (GEMA). This happens because since January 27, the day of the first terrorist attack in Esmeraldas, the Police has sent more than 200 specialized uniformed personnel to the area.

The community or preventive police will also undergo the tests. In Esmeraldas, the area where most of the current problems are concentrated, 93 agents have already been separated. They left the police ranks in 2015.

There, the evaluations determined that the agents collaborated with the mafias. It was detected that they gave information about the controls and it was even identified that they used the equipment to mobilize drug shipments.

But 39 of them have denied possible links to criminal networks. In areas such as San Lorenzo and Eloy Alfaro there is concern among the police officers who work there. They are afraid that after the evaluations they will be moved from the workplace.

In addition, they assure that they do not know the qualification parameters of each test. “We do not know, for example, what score each test will have,” said an agent in San Lorenzo. According to the Police, those details will be known this month. But he indicates that no uniformed will be persecuted.

In addition, it is analyzed to launch a series of trainings to reinforce the ethics of agents at the border. Another strategy that police officers use to prevent personnel from being co-opted by the mafia is to rotate them permanently. There is also a Counterintelligence service, which tracks unusual movements.

On April 26, the then Minister of the Interior, César Navas, informed that the evaluation of police officers will not be carried out only in Esmeraldas. The former official said that it is vital to extend the evidence to the uniformed personnel operating throughout the border with Colombia. (I)