Those two pills in his hand symbolize a fight of months. They represent whole days between letters of claim,  complaints  to rights defense organizations and insistent visits to the hospital. 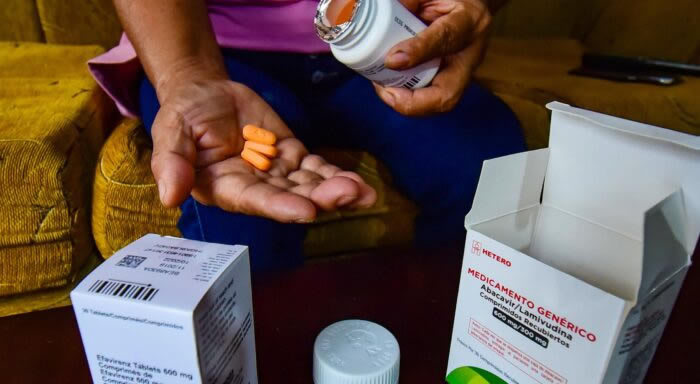 Beatriz – she prefers not to give her real name – leads a group of  patients with HIV / AIDS , distressed by the recurring delay in the delivery of antiretrovirals. The problem affects members of the Ecuadorian Social Security Institute (IESS), particularly those who go to the Teodoro Maldonado Carbo hospital  .

“We are 5,200 users -from Guayaquil and coastal provinces-, with different  drug schemes . As a temporary solution, a part of the medication arrived, ”says Beatriz.

That temporary solution was finalized last week, after three months of waiting. It was a  batch of tenofovir  plus emtricitabine, a shipment of  generic medicine  that ran out in a few days. Beatriz says that among the patients they agreed to receive only one box (of 30 pills) so that everyone had access.

The contract that made the delivery possible had to be corrected after an overprice alert, an evil that affects this IESS hospital. Francisco Andino , manager of Teodoro Maldonado since July, explains that the initially accepted offer was for USD 641,000. After a review, the second offer was chosen, at USD 191,000.

“The process was almost finished, with a markup of 300% (…). What is coming in the future, in the case of  antiretrovirals , is the corporate purchase through the strategic fund of PAHO (Pan American Health Organization). We will solve it until February or March 2022 ”, he says.

The regional fund is a technical cooperation mechanism for joint purchases of essential drugs. According to PAHO, 34 countries have availed themselves of this system.

Between 2018 and 2021, the fund set as a goal the coverage of 1.8 million  patients with HIV  in the region. The Ministry of Public Health (MSP) is part of this initiative, which has prevented shortages.