6.811 indigenous students even up on their studies for university 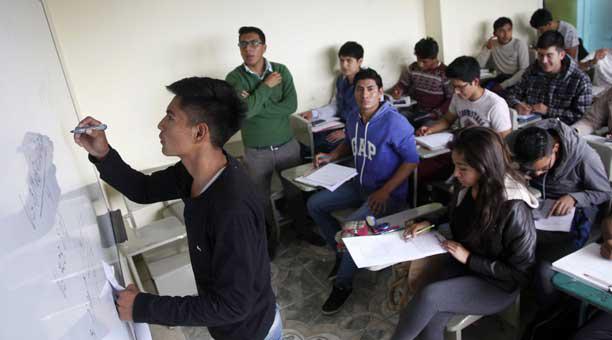 Eduardo Contento, from the Quichua Saraguro people, had a dream: to become an environmental engineer. And this month he took his first steps to achieve it, as he achieved a spot in the pre-university.

The young man is part of a group of 6,811 boys from indigenous peoples and nationalities, who began their higher education. They represent 9.4% of a total of 72 322 students, who accepted a place in the second semester of the year, according to the Secretariat of Higher Education, Science, Technology and Innovation.

The number is higher than in the first semester of this year, when 2.4% of boys from these ethnic groups accepted a place.

The increase of students belonging to peoples and nationalities is the result of a policy of dialogue between the Senescyt and national and regional indigenous organizations. This was said by Jaime Vargas, president of the Confederation of Indigenous Nationalities of Ecuador.

The remoteness of their communities and their economic situation were some of the factors that were evaluated when promoting their entry into the higher education system, said the head of the Confederation of Indigenous Nationalities of Ecuador.

The boys entered the career leveling. This is how they seek to equate their knowledge for an adequate insertion in higher education.

Four years ago, Contento, who is a native of the community of Membrillo (in Loja), did not reach a place, because his score was low, with 672 points (over a thousand) he has already entered leveling at the Universidad Central.

In this establishment 5,891 students entered to comply with this process, which was previously known as propaedeutic. This is 24% more compared to the first period of this year, when there were 4 752 registered, explained Margarita Medina, academic director of the university.

Among them there are 52 people from indigenous peoples and nationalities. The majority of Cotopaxi, followed by Pichincha and Loja. Sayri Chacha, indigenous of Guaranda, in Bolívar, attend the leveling at the Central University. He wants to be a civil engineer.

The young man recognizes that it was difficult to enter the university but he did it, since he obtained 745 points. For this, he was prepared via Internet. A similar situation was experienced by Óscar Logro, born in the parish of Cochapamba, in Cotopaxi. He also opted for civil engineering. His father gave him financial support.

Improving access roads and raising houses are some of the works he will do when he is titled. These are his plans. When he received thenews that he got a place, he did not think twice. So he packed suitcases and traveled to the capital. The first days were the hardest because he left his family. Today he got used to the rhythm of studies and his classmates.

Today (November 22, 2017) opens the registration for the test Be Bachelor in the Costa cycle. The exam will be applied in January 2018 and the score will be decisive to access a public university.

The secretary of Higher Education, Adrián Bonilla, calculates that 305,000 applicants will enroll, between high school graduates and those who will repeat the evaluation. But the universities and state institutes have only about 77 500 places.

Accessing a public university does not depend on a minimum score but on the supply and demand of a career. If in a university -explained Bonilla- 300 medical places are offered and there are 5,000 applicants, those who have the highest scores will be the ones chosen.

To expand the offer,  Bonilla said that they are working with universities and public institutes. On the one hand, they will analyze the quality evaluations that have led some centers to reduce the number of students and also the issue of resources, to enable more classrooms and teachers.

Thus, for 2018, Bonilla explained that they expect to increase the offer of higher education quotas by 20%.

To submit the Bachiller, applicants must register until December 6. This year the registration includes a survey of associated factors, which is mandatory and must be completed until December 22.

These data will help the Secretariat of Higher Education to determine public policies, such as quotas. In this way, it seeks to guarantee access to higher education by socioeconomic indicators, disability, ethnicity and others. On the Coast, the test will be taken from January 24 to 29 next year.

Carlos Bravo, executive director of the National Institute of Educational Evaluation, recalled that the exam evaluates five domains: mathematical, linguistic, scientific, social and abstract. The exam has 160 multiple-choice questions. According to the authorities, the content of the questionnaire covers 90% reasoning and 10% knowledge (I)